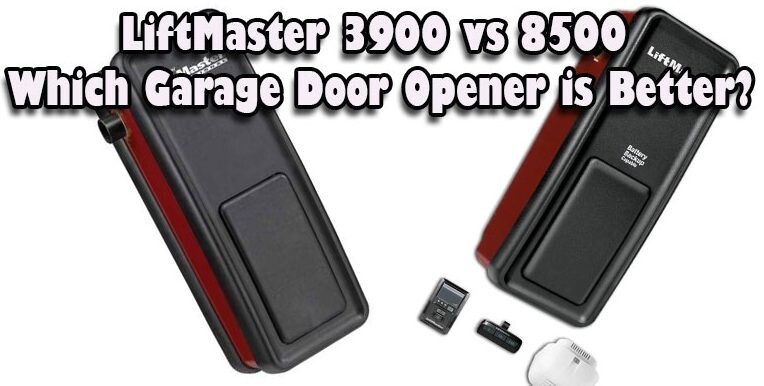 Anybody with kids, school bags, shopping, or even just a hot coffee knows how convenient it is to have an electronic garage door opener. They also provide added security knowing you don’t have to get out of the car to enter your home. LiftMaster has a range of electronic door openers with different systems, appearances, and technology. Today, we will look at the LiftMaster 3900 vs 8500. We will consider their uses, functions, and compatibility in order for you to make the right choice.

Older systems may run using a chain and teeth connected to a motor, The Jackshaft system in both the LiftMaster 3900 and the LiftMaster 8500 works with two cranks, and gear or pulley. This makes the movement of the door much smoother and it reduces the amount of noise.  They are both ultra-quiet in use.

These are wall-mounted garage door openers rather than ceiling mounted. This allows for saving space, particularly overhead space. In terms of installation, it is also easier installing them alongside the door instead of trying to work on the ceiling.

There are a couple of other aspects that appear to be similar but in fact are not, so we will cover these in the following section.

Below, you will find a comparison chart so that you can see all of the specifications we will mention side-by-side. 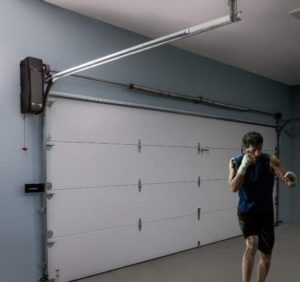 You will probably notice the size difference more than the weight. It’s 2 x 10 x 12 inches and weighs 28lbs.

The Winner Is- The LiftMaster 3900 There is the option to attach a battery so that they will function if there is a power cut. The battery backup is not included. While both are 240v there are some differences with the actual motor itself.

This runs on a heavy-duty 240v. It’s powerful enough to lift doors up to 650lbs.

This uses P3 motors. While still using 240v, they are designed especially for electronic garage door openers. The 8500 is also capable of lifting doors of up to 650lbs.

The controls that come with a garage door greatly improve the ease of use. In this aspect, the two are quite different.

The control panel is a touch button pad. There is nothing modern about it but t does the job. Unfortunately, it only comes with one remote control. You can buy additional remotes.

The Winner Is- A Tie

As these electronic garage door openers are operating heavy equipment, it’s essential that they have certain security features. You also want to make sure your home is still safe.

This comes with Security +. A new code will be generated each time you open the door, ensuring that nobody else can enter. There is a light beam that goes across the door. If the beam is broken, the door will stop opening or closing.

This comes with Security 2.0, which we believe is the same as Security +. A new code is generated each time. As well as the light beam, it comes with audio and visual warnings. Another incredibly useful feature is the motion detector light. This will light up your garage when you enter, making things visible and safer. Finally, the LiftMaster 8500 comes with a locking system.

There is no price for your security, that being said, both the LiftMaster 3900 and the LiftMaster 8500 are in the average price range for a well-known garage door opener brand. Considering it lacks come of the extra features, it’s surprising that it costs quite a bit more than the LiftMaster 8500. What surprised us further was that the LiftMaster 3900 only comes with a 2-year warranty.

While cheaper than the LiftMaster 3900, you will still have to pay out a little extra if you want to use the MyQ feature. The warranty is much more attractive at 5 years.

Before giving our final verdict, we have a few pros and cons for each of the LiftMaster garage door openers.

Regarding size and appearance, they are both tidy, compact machines that will save you space. The LiftMaster 3900 has the slight advantage of being a little smaller, but we didn’t feel that this was enough to affect the buyer’s decision.

Overall, we preferred the LiftMaster LiftMaster 8500. The motion sensor light may not seem important but it was a huge benefit. The locking system is a necessity. And, to be honest, we liked being able to control our garage door from our phones. They may only seem like little things, but when put together, they make the LiftMaster 8500 superior.