It’s incredibly difficult to enjoy the fresh air with today’s levels of pollution. Air conditioning dries people out and inevitably makes us feel stuffy. When we arrive home, it’s not a luxury, but a necessity to breathe fresh air. Vornado has a series of air circulators that keeps the air flowing through a room, eliminating the stale atmosphere we sometimes sense. The two air circulators we are going to look at today are the Vornado 533 vs 633.

While they do have some similarities, we are also going to provide specific details regarding how they differ. All of the information for the Vornado air circulators can be found in a comparison chart, as well as some pros and cons. The final part of this article will be where we deliver our final verdict. Let’s begin with the similarities.

The two Vornado air circulators are equipped with Vortex technology. Rather than a fan that oscillates from side to side, the Vornado’s push air in a stream. The airflow hits a wall and then disperses across the rest of the room.

Both the Vornado 533 and the Vornado 633 has 3 speeds to choose from. This way you are able to decide just how much power it uses and the force in which the air flows.

These two Vornado air circulators are whisper quiet. They are designed to be used in any room of the house without disturbing you. They are also energy efficient, meaning you can enjoy fresh air without having to worry about a massive difference in your electric bill.

Now, let’s take a closer look at the differences between the Vornado 533 and the Vornado 633. 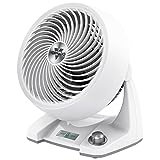 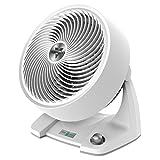 Most air circulators are fairly similar in their looks. They are normally compact and designed to be able to sit on a desk, or in the corner of a room. Generally speaking, Vornado air circulators look almost identical, coming in black or white. On the highest setting, the Vornado 533 has 2000RPM, which is very powerful. The deep blades that help to push more air out of the inlet help the airflow.

On the highest setting, there is 1570RPM. On the lowest setting, it has 1000RPM. It also has deep blades to push more air out with each revolution. Generally speaking, the further an air circulator can push the air the more suited it is to larger rooms.

The 533 has a maximum airflow of 70ft. For the Vortex technology to work, it is best to make sure the air circulator is placed within 70ft of a wall.

This model will handle larger rooms because the airflow has a maximum distance of 75ft.

The Winner Is- The Vornado 633 Prices will vary greatly from brand to brand, and depending on the room size they are designed for. You can find air circulators for as little as $50 and as much as $300. Similarly, some come with a one/two year-warranty, others don’t have any.

As we mentioned before, the Vornado 533 has a 5-year warranty. It comes with a great price, towards the lower end of average.

The 5-year warranty is generous, however, it is more expensive than the 533.

The pros and cons of the Vornado 533 and the Vornado 633 should help you resolve any doubts that you may still have between the two air circulators. Even after a lot of investigation, it’s difficult to see why the Vornado is so much more expensive than the Vornado 533. They both have the same speed settings, they are energy savers and whisper quite. They also both have a 5-year warranty.

The only noticeable benefit to the Vornado 633 is that it can move the air 5ft further, which is only of value if you have a larger room. Still, even at 70ft, the Vornado 533 is sufficient for most rooms in the house.

We decided to choose the Vornado 533 today. It’s lighter, slightly more compact in its design. It also has the advantage of a higher RPM, so even on the lower settings, it will be powerful. We aren’t sure about the cord length, but we don’t feel that it can be so short that you would need to spend twice as much for the Vornado 633.